From Hot To Not…Favorite Peppers 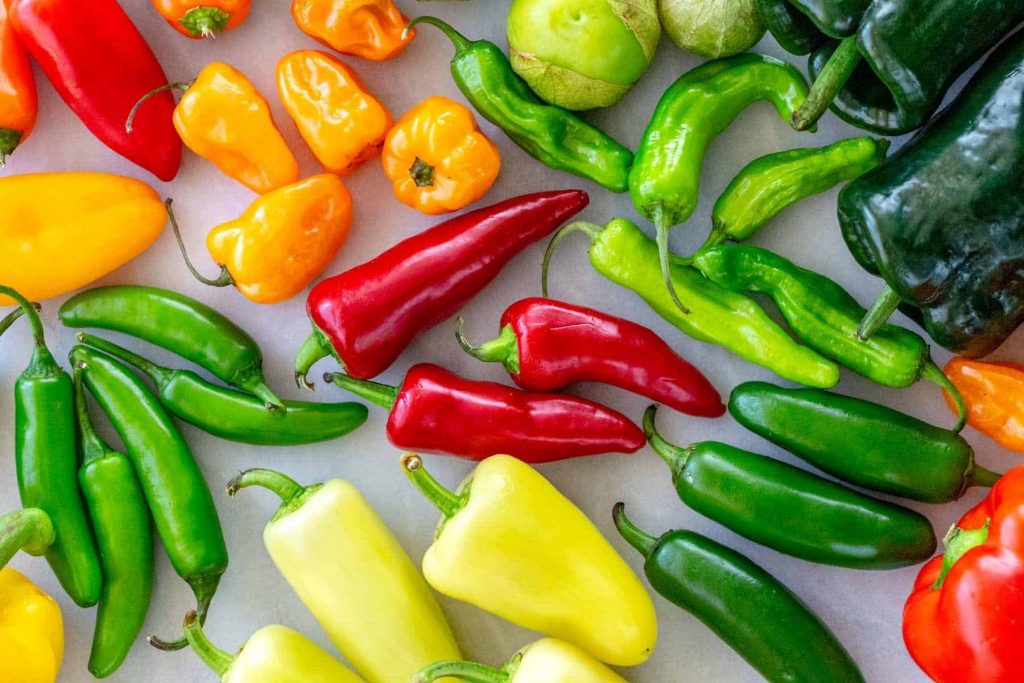 If you had to name a food you eat almost every day what would your answer be? Not what you should be eating but what do you really eat every day…your go to? Some might say an apple, eggs, cheese, chocolate? Weirdly enough my answer would be a bell pepper!

What’s not to love about peppers?! Ok, let’s be totally honest. My go-to for sure would be a cup of coffee with cream. But my work-it-in favorite food is a pepper. I like the sweeter varieties like the red, yellow or orange. 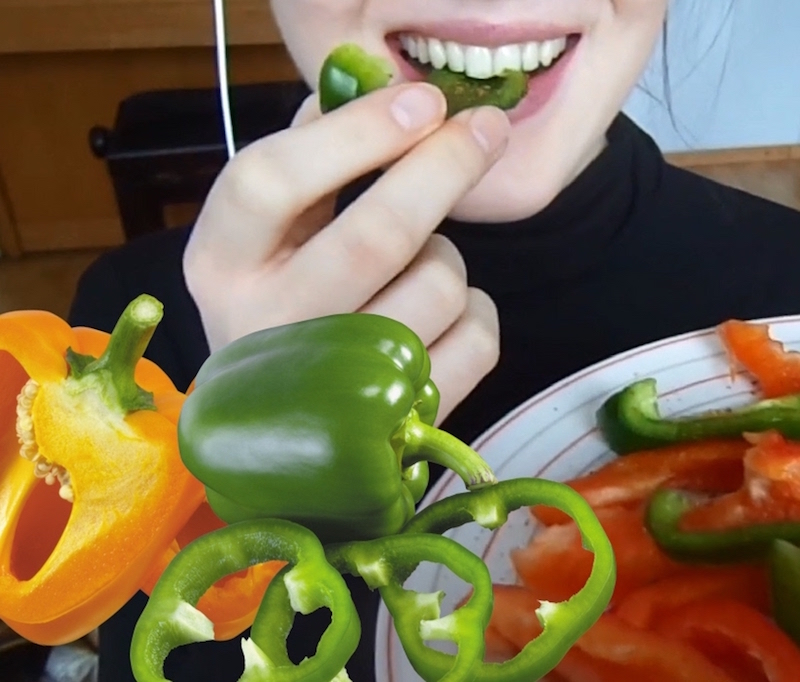 For the last six months or so I’ve made sure I have a pepper every day in some form or another. I love diced peppers in my scrambled eggs, slices in my sandwich wraps and chopped in chunks and added to my roasted veggies. If they aren’t part of the recipe for that night’s main dish, I’ll add them to a salad. But my favorite is to make a snack-plate of sliced peppers. I like to sprinkle just a little salt over them. The crisp snap combined with the slight saltiness solves my need for salty chip-type snacks.

It’s good news that peppers are just 31 calories each and made up of 92% water, but what is really cool is that a red or green bell pepper contains more than three times the amount of vitamin C than an orange! Who knew? Red peppers are also a great source of vitamin B6 and folate. Keep extra cut peppers in the freezer so you never run out. 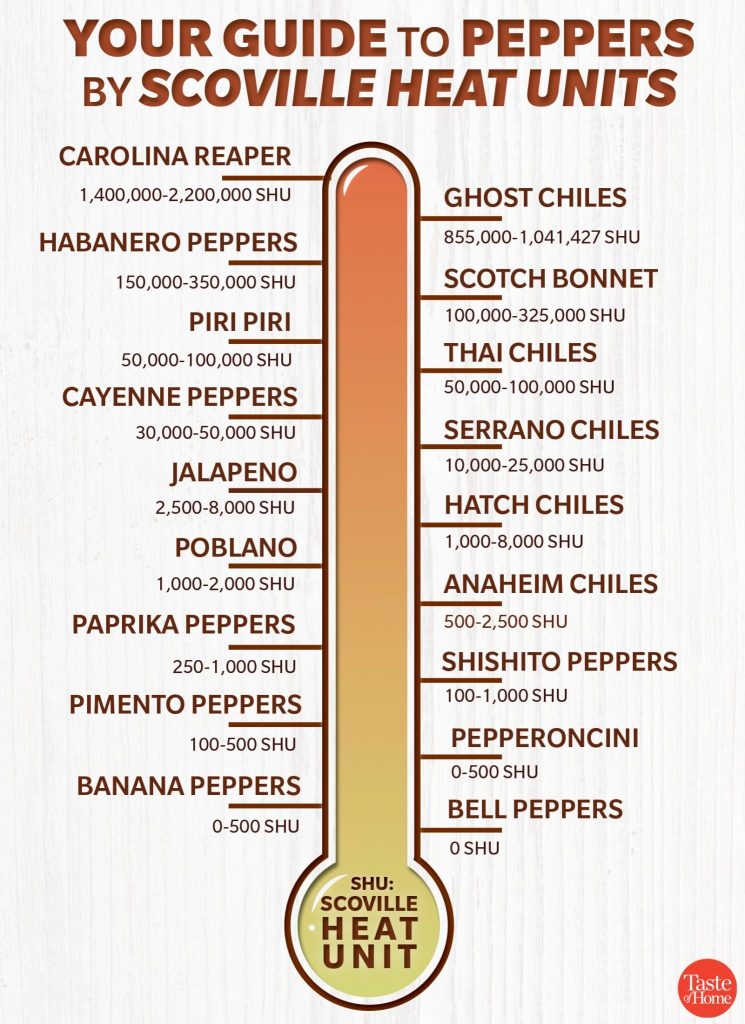 There are so many other varieties of peppers to enjoy, from  the sweet to the spicy hot. That sensation of heat when eating peppers is due to the chemical capsaicin—the more capsaicin, the hotter the pepper. The heat level (spiciness) of food is measured according to the Scoville Heat Unit scale. Check out the scale for your favorite varieties. Watch out for the Carolina Reaper variety. It looks pretty scorching!

Habanero Peppers: This cute little pepper has a subtle fruity flavor but  packs a fierce heat. Orange is the most common color, but they can be red, white or brown. Habaneros are particularly good for salsa, hot sauce and jerk recipes.

Jalapeño Peppers: Green or red (red is a touch sweeter), jalapeños once dried and smoked are called chipotle chiles. The spice level can vary greatly from pepper to pepper, so you may want to test a bite first. Most of the heat is concentrated in the membranes, so remove them if you want to reduce the fire.

Poblano Peppers:  These peppers are super for grilling and stuffing because of their thick walls and mild, earthy flavor. They’re generally sold fresh, young and dark green, but once ripened and dried, they’re called ancho peppers and hold much more heat.

Banana Peppers: These mild, sweet peppers live up to their name in shape and color, although they can change to red or orange as they ripen. Also known as yellow wax pepper, make sure you don’t confuse them with Hungarian wax peppers which are much hotter.

Bell Peppers:  Some folks think green peppers are just red peppers that haven’t ripened. This is not true. Granted, red peppers take longer to ripen and may start out green, but green, purple, yellow, orange and red are all different bell pepper varieties, each with their own distinctive taste. Check out the bottom of the bell pepper and count the lobes. If it has four lobes it’s a female pepper, which produces more seeds and is sweeter than a male pepper which has three lobes. 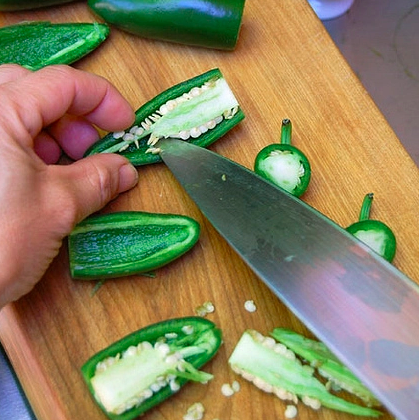 How to Soothe the Hot Pepper Burn

It’s easy to overdo it, so it’s best to start with a little and add to taste as you go.  If you find your dish too hot, here are a few tricks to tone down the heat. 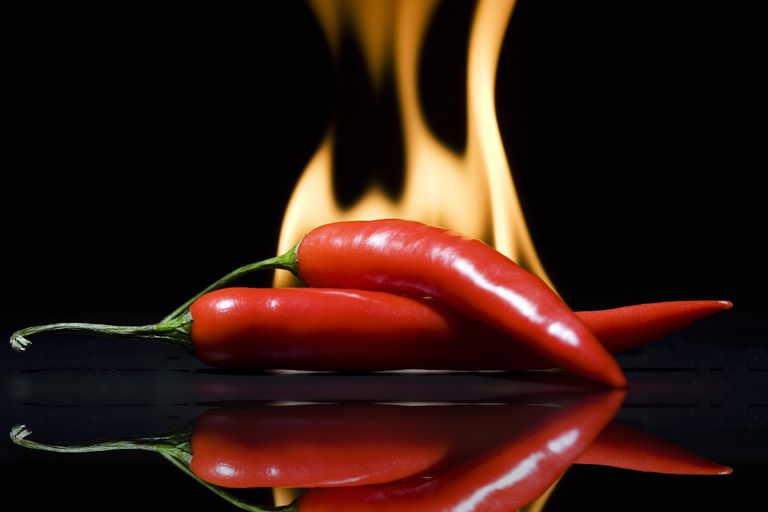 If your mouth feels fiery, go for a glass of milk—not water. The fats in milk work to dissolve spicy capsaicin, while water simply spreads it around. Carbonated drinks, such as sodas and fizzy beers, actually heighten the tongue’s sensitivity, so they’re not a relief, either.

You can search for an ingredient (e.g. eggplant, etc) the name or part of the name of a recipe (lasagna), a cuisine (Italian), type of dish (e.g. soup), an occasion (Thanksgiving, breakfast, tailgating, etc). 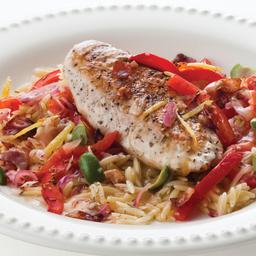 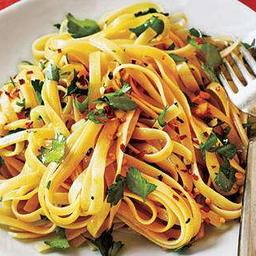 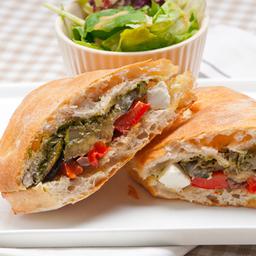 A tasty and healthy sandwich.